The conversation surrounding equality and inclusion has taken centre stage over the past year, and so has the plight of women during the complications caused by the pandemic. This reality makes it even more important to shine a light on International Women’s Day (#IWD2021), held March 8, which has selected the 2021 theme: “Choose to Challenge.”

The idea behind the #choosetochallenge theme is simple: “A challenged world is an alert world. We can all choose to challenge and call out gender bias and inequality. We can all choose to seek out and celebrate women’s achievements. Collectively, we can all help create an inclusive world.” Supporting #IWD2021 is part of Cint’s commitment to our core values of accountability, collaboration and innovation, and we are proud to uphold these values by championing important social causes that promote diversity, equality and well-being.

To expand on some thoughts for International Women’s Day, we interviewed Cint women working in different roles and different countries around the world. Our interviewees included:

In addition, a separate interview with Cint board member, Cecilia Qvist, can be found on the leading Swedish financial site, di.se. While their personal and professional experiences vary widely, these women voiced several common themes.

What can companies, organisations and individuals do to help ensure gender equality?

Transparency at all levels of the business is an important part of this answer. Jane says that many of the challenges we see surrounding equality are happening simply because we aren’t talking about it enough. Organisations need to provide transparency around things like pay levels and other metrics – “if you take away those barriers, it makes everything more measurable.” 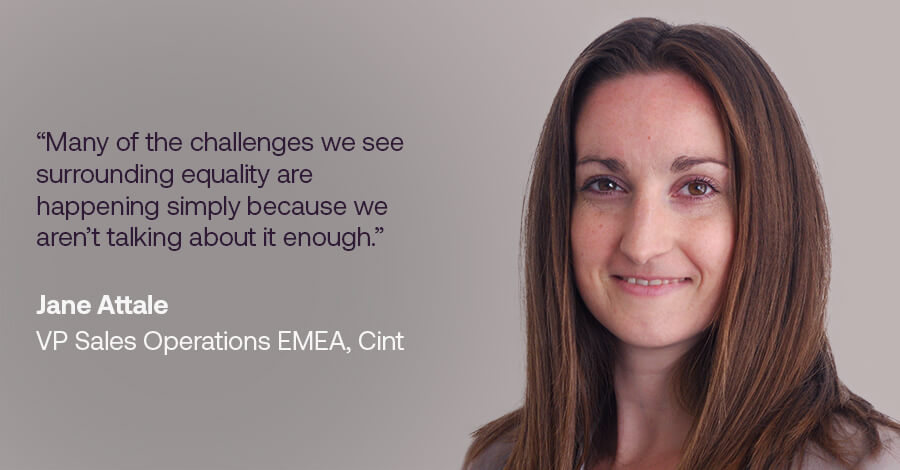 Alexandra agrees, saying that “Companies need to commit to transparency, action items, and a timeline.” She’d like to see organisations commit to ensuring women are interviewed for every open role, conducting an annual review of salaries to erase pay gaps, and committing to formal outreach and investment in a variety of equality initiatives.

These are all practical measures that companies can take to start clearing the path for women to take leadership positions. In addition, Katie says, “Women need to be prioritised for leadership positions and stop being passed over for job opportunities…It is up to leadership within organisations to cultivate a culture of positivity and growth for all genders, making a formal commitment to having an equal number of women on boards, as directors, and as leaders within companies is a good place to start.” 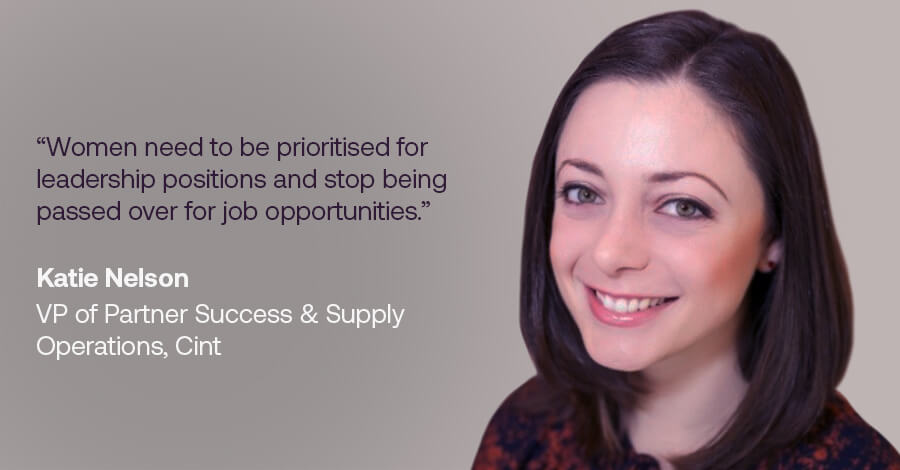 Helene says that in order to make it possible for women to step into these roles, companies need to implement basic policies that make it possible, such as flexible working hours that allow for a balance between work and family responsibilities. Katie feels that while flexibility is helpful, companies need to take it a step further and take a close look at childcare policies. Without adequate childcare support, “the burden and stress will always fall on women’s shoulders.”

Indie points to some other helpful actions, such as mentoring among women at different stages of their career journey and for men to play a role by championing and “becoming executive sponsors for women wanting to move up the ladder.” 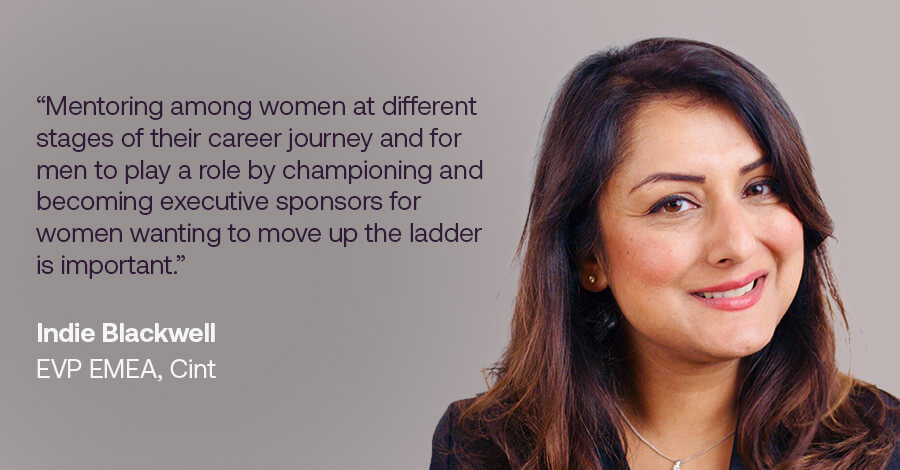 What role do you feel the market research industry has to play when it comes to challenging inequality and forging progress?

Alexandra agrees. She says: “Market research has the distinct responsibility to challenge inequality and forge progress.” Because of dealing in consumer data, it is up to our industry to provide a diverse, equality-driven viewpoint – this should be represented in the structure of our leadership teams as well.

In many ways, the market research industry is working hard on breaking barriers despite the typical stereotypes that still exist. Veronica applauds the strides that industry groups, such as ESOMAR and Women in Research (WIRe), have made in bringing equality issues to the forefront. She says that since she began working in the industry a few years ago, she’s gratified to see a strong effort by many leaders, high-profile companies, and industry organisations in pushing critical issues like equality and diversity into the spotlight. 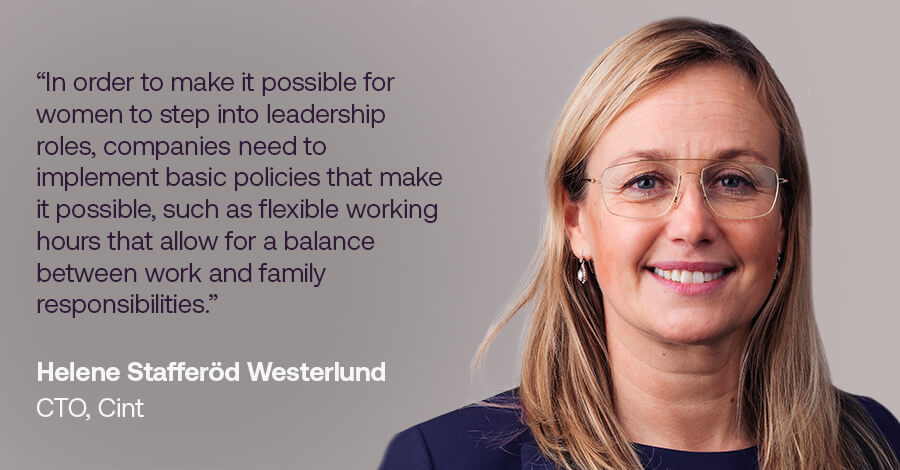 The pandemic has changed the daily workday for many, as work-from-home models became necessary. What are your thoughts about the implications of this long-term for women?

For those women who can work from home, there have been significant changes. Jane and Helene both felt that a flexible working schedule may continue for some, because employees were able to prove that they could be effective while working from home. Jane says, “managers that may have been inflexible in the past have now seen that their employees do not have to physically be in the office to do their jobs.” Helene believes that once we go “back to normal” many will continue to work from home, especially women.

Alexandra states this even more strongly, indicating that if a company has not taken strides to translate their “in-office” or “pre-pandemic” culture to today’s increased remote and flexible working patterns, then “equality will not increase.” This flexibility needs to be normalised for women to take advantage of the benefits of remote work and not fall behind, especially when it comes to in-person relationship building.

Veronica believes there is an added layer to the work-from-home model as it has allowed people a unique view into the lives of their colleagues, partners, clients, and peers. Bringing meetings into our homes has created opportunities for more personal connections and boosted empathy, which can strengthen relationships in the long run.

Despite this newfound daily flexibility, our interviewees agreed that overall, the pandemic has deepened inequalities, as the burden of childcare, household tasks, and other family concerns has piled on top of existing professional work responsibilities. While some women have chosen to stop working rather than trying to juggle this massive amount of added work, this – again – is very different among specific groups of women. Alexandra says, “If anything, I think the pandemic has widened the socio/economic and career divide between women with and without children.” 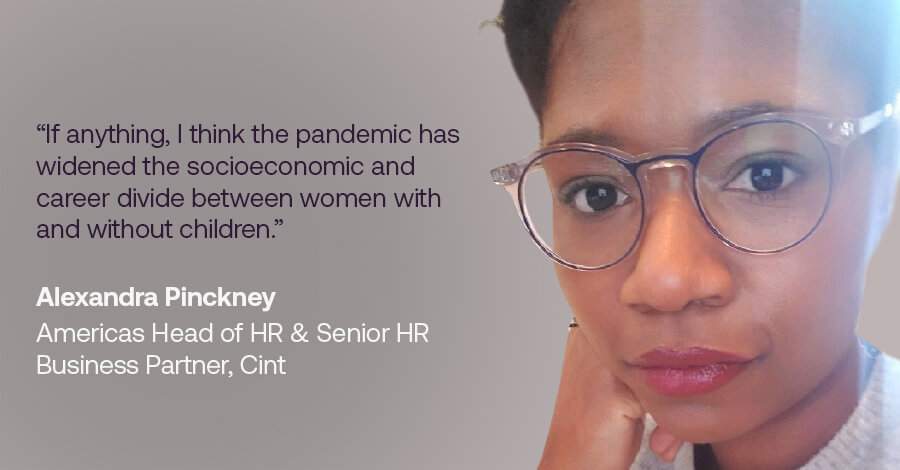 No matter how far we have come, Indie says “we are still not equal in the home…no matter how understanding and helpful partners are.” Veronica stresses the need to normalise men sharing an equal burden in the home to help strike a better balance.

Katie reiterates the need for adequate programs to support working mothers. “Companies should provide childcare to their employees. Really, it’s a win-win. Women will be more productive and happier with their career if some of their home stress is alleviated.”

Understanding that this may not be the case at other companies, the consensus was that Cint provides ample support in this arena. Alexandra says, “At Cint, I have witnessed male colleagues/managers not only support the achievements of their colleagues who happen to be women but also advocate for their career progression.”

Veronica agrees and says she actively sees women supporting one another, and also men who act as strong allies to women employees. She says, “I realise that I work at a more progressive company, and some women are not lucky enough to work in industries or at organisations that have these same sensibilities.” (As a sidenote, Indie believes that we need to definitely “shout about” our gender balance on the Cint board!) 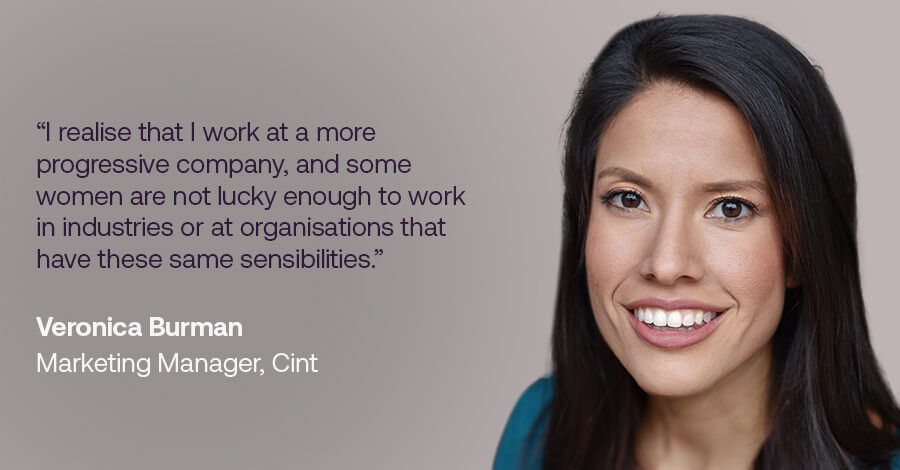 On a general level, our interviewees were split as to whether there is adequate celebration of women’s achievements in society as a whole. Jane says “Whether male or female, we really don’t celebrate each other’s achievements enough, perhaps because people don’t feel comfortable talking about their own successes. We all need to be advocates for each other.”

She continues, “When it comes to equality for women, it’s not just about breaking that glass ceiling anymore. It’s about building an escalator so that everybody can rise up together. By taking this approach, not only will you smash through that ceiling, but you will also build a path to allow hundreds of people to follow in your footsteps.”

Thank you to all our “respondents” for contributing to this important discussion. Happy International Women’s Day everyone – go forth, Choose to Challenge, and “celebrate women’s achievements and rally for women’s equality.”

Will sustainability take a back seat as the cost of living crisis bites? Cint powers the Catalyst program, which has found that retailers have a key role to play when it comes to the discovery of sustainable goods.

Never has the volatility of global supply chains been more apparent than it is now. And so, as part of the Catalyst research program, which taps into Cint’s global consumer network, our market research automation platform helped to investigate consumer response to out-of-stock issues.

Cost of living crisis becomes the most pressing global issue

Consumer opinion captured through the Catalyst program, which tracks social and environmental concerns via Cint’s consumer network for digital market research, has found that while anxiety over Covid is falling, it is being replaced by mounting concern around the cost of living.